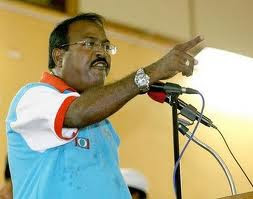 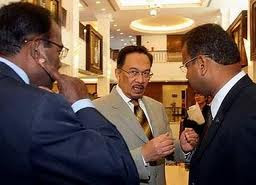 salam kepada semua...
WHO IS ANTI HINDU?
ARE YOU KNOW?
YOU WANTS TO KNOW?
ASK  N.GOBALAKRISHNAN......
HE KNOW THE ANSWER.....
N. Gobalakrishnan continued his onslaught against Datuk Seri Anwar Ibrahim today and called the PKR de facto leader anti-Hindu for failing the Indian community.The Padang Serai MP has been on a rampage against the party leadership via microblogging site Twitter over the past weeks, centring most of his attacks on Anwar and newly-elected deputy president Azmin Ali.
He told The Malaysian Insider that both Anwar and Azmin have been “cheating and bluffing the Indians”, claiming that the community had become worst off after Pakatan Rakyat claimed Selangor.Gobalakrishnan (picture) said today that Anwar was showing his true colours by refusing to re-open the Sivan temple in Petaling Jaya and denying the Hindu community a state executive councillor in Selangor.
“Anwar continues to victimise the Hindus. I think he is anti-Hindu by the way he is behaving. I am not asking to remove anybody but include another Hindu (in the Selangor state executive council) so we won’t have any of these problems.“They want our votes, we vote. I go ask and beg the people to vote. The day I joined PKR, the Hindus and Indians were throwing stones at me. Nobody wanted join Keadilan,” he told reporters while flanked by former MIC leader KP Samy and former MIC Youth information chief S. Subramaniam during a press conference.
He pointed out that 90 per cent of the Indian community in Selangor are Hindus but ironically they are not represented in the state government.He stressed that it was his responsibility to fight for the Indian community regardless of party lines.“It is my responsibility as a leader of the Indian community to represent the Indians who are neglected. The Indians in this country need proper representation and that is why I been vocal.
“And that is the sole reason why Anwar has pushed me aside and also to placate Azmin Ali and (his wife) Shamsida (Taharin). I am not concerned about all that, I want Datuk Seri Anwar to re-open the (Sivan) temple to the public,” he said.He also spoke again on the closure of the Sivan temple on Bukit Gasing in Petaling Jaya, which he claimed had been Anwar’s doing.He added that there are others temples in Pakatan Rakyat (PR) states which are facing similar problems.