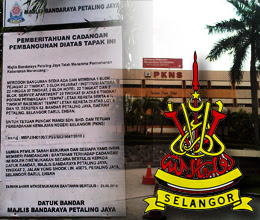 A check with the Selangor Land and Mines Office revealed that Mohd Salim also owns Bisraya Construction Sdn Bhd, which placed a caveat on the PKNS land in May last year.
The registered addresses of Puncak Wangi, Gapurna and Bisraya are all at Kelana Brem Tower in Kelana Jaya. And the three companies share one secretary by the name of Gong Lu Kew.
A PKR leader in Kelana Jaya told FMT that Azmin was known to have an interest in developing PKNS land for commercial purposes.
He also said that after the 2008 general election, many of the big contractors who used to support BN switched their allegiance to Pakatan.
He said he and several associates had tried to solve the mystery behind Puncak Wangi by checking on the backgrounds of Mohd Azri and Krushiah.
“We found they are not prominent figures,” he said. “They don’t even seem to have enough money to buy nice cars. They use only Satria and Kancil.
"Where does their money go? Who makes profits by using their name? I hope Selcat can reveal the mystery behind the contract."
Dicatat oleh asri di Rabu, Disember 22, 2010