The carbon intensity of electricity

In the countries colored dark green like Norway, Iceland and Paraguay the direct emissions from electricity generation are less than 20g CO2/kWh , because of the dominance of hydroelectricity, and some geothermal in Iceland.  In India, Mongolia, and South Africa the dark red coloring indicates electricity emissions of more than 900g CO2/kWh, due to coal’s dominance.
Most other countries use a mix of generation sources, so they are somewhere in between. 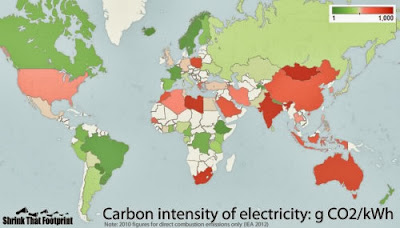 Norway has the biggest usage at almost 8,000 kWh per person.  Americans, Finnish, Canadian and Swedish all use more than 4,000 kWh each.  While places like Cameroon, India and Tanzania use as little as 100 kWh per person, so their rectangles are barely visible.

Now that we have data for the carbon intensity of electricity and how much people use in their homes we can compare residential electricity emissions.
For this comparison we will also account for the emissions caused by grid losses using World Bank data but won’t include upstream emissions from things like fuel production, processing or equipment manufacturing.
The results are revealing. 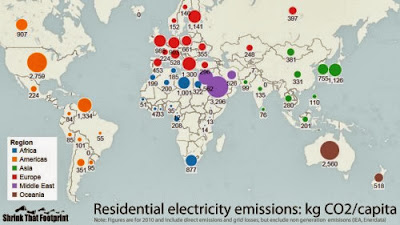 The largest footprints are from those countries that both use a lot of electricity and have quite carbon intensive electricity.  Of the sixty or so countries we analysed Saudi Arabia, the United States and Australia had by far the largest emissions at more than 2,500 kg per person.
In stark contrast Iceland, Paraguay and Ethiopia each registered 0 kg, due to their incredibly low carbon power.  Notably, Norway which uses almost double the residential electricity per capita as the US has emissions of just 152kg per person.  In contrast India has more carbon intensive electricity than the US, but emits just 135kg per person due to such limited electricity use.
It is also interesting that Chinese emissions are just 331 kg per person despite their high coal use.  This highlights just how small the residential share of electricity use is in China.  A quick look at IEA stats shows that Chinese residents use just 18% of generated electricity, in the US that figure is 38%.
The calculations used in this post can easily be used to approach your own electricity footprint.
In the coming months I’ll publish some posts looking both at how we can cut our electricity use, and source low carbon power.