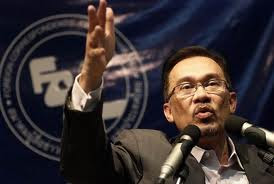 The outcome of his trial "vindicates Anwar and significantly removes doubts about his personal conduct, which had been a concern especially among conservative Muslim voters," said Ibrahim Suffian, head of polling outfit Merdeka Centre.

Charismatic opposition leader Anwar Ibrahim's acquittal in a frame-up case throws open the political future of Malaysia, uninterruptedly ruled by the Barisan Nasional coalition for almost half a century.

So deep is the prevailing cynicism there, thanks to the government's domineering presence that he would walk free once again, he did not expect, nor his supporters.

Earlier too, he was imprisoned by his friend-turned-enemy Prime Minister Mahathir Mohammad on similar charges, the widely seen then as politically motivated.

Now that he is free and has promised to revive his political career, he tends to emerge as the strongest-ever challenge to the ruling coalition.
The rainbow opposition coalition, Pakatan Rakyat (People's Alliance), has the desired potential to do that as it proved in the general election in 2008.

Now that he would be leading it in person, he is expected to do even better in the election scheduled for early next year.

The charges against him were fabricated to keep him out of Malaysian politics, and the credit goes to the rising clout of institutions.

The judiciary is bolder than ever before and Prime Minister Najib Razak too seems to be eager on delivering his oft-repeated pledges of reforms to civil liberties.

But it was Anwar Ibrahim's supporters who thronged the streets of Kuala Lumpur, shouting the opposition's battle cry "Reformasi".

The 'spring' that is buffeting the Arab World, and has already arrived in Pakistan, now seems to be making its way to the Far East with Malaysia seemingly its first destination. It was Anwar Ibrahim's market-friendly policies that ushered in the economic prosperity that earned Malaysia the brand of an Asian Tiger.

But sensing that his deputy premier has the right potential to become threat to his position Mahathir Mohammad sacked him, following it up with the usual Third World-specific treatment of political opponents.

But for his wife Wan Azizah Wan Ismail's iconic fight against the frame-up that kept Anwar Ibrahim's plight at the hands of his erstwhile friend and mentor alive.

Now that an air of change is sweeping across Malaysia and its multi-ethnic society appears receptive of it here cometh the hour cometh the man.

Anwar Ibrahim has to 'reinvent' himself, mainly by overlooking his victimisation and he has the capacity to do so.

The outcome of his trial "vindicates Anwar and significantly removes doubts about his personal conduct, which had been a concern especially among conservative Muslim voters," said Ibrahim Suffian, head of polling outfit Merdeka Centre.

Looking to the future Anwar Ibrahim's "only concern is now to ensure that the elections are held free and fair".

That he can turn the tables on the ruling coalition he is confident, his success expected to be more spectacular than in 2008 when even from behind the bars he could seize control of five states (provinces) and one-third of the parliamentary seats.
Dicatat oleh asri di Ahad, Januari 15, 2012