The mayor's office in Sloviansk is among the strategic buildings to have been seized by armed men
The Ukraine crisis is entering a new and dangerous phase. The seizure of police and administrative buildings in several cities in the eastern part of the country by what some describe as pro-Russian activists raises the prospect of a firm response from the Kiev government.

This, in turn, could give the Russian authorities the pretext they need to move the military forces massed on Ukraine's frontier westwards.

Alternatively this may just all be political theatre, an attempt to visibly up the stakes; mounted to scare the interim Ukrainian government and perhaps also to scupper four-way talks - between Ukraine, Russia, the US and the EU - that were loosely planned for this week.

“Start Quote
Western analysts of the crisis and governments are at a loss to explain any means to prevent Russia achieving its strategic goals in Ukraine - we see only hand-wringing and embarrassment”
Roger McDermott Jamestown Foundation
Alternatively Moscow may simply be seeking to control the context in which any talks take place. Either way the temperature is rising and a diplomatic solution to this crisis seems now more distant than ever.

So what of the assertion by Nato sources and western leaders that the Russian military is already conducting covert operations in eastern Ukraine?

The evidence from social media sites shows that groups of men, well armed and uniformly equipped, have been involved in a number of the initial seizures of buildings in eastern Ukrainian cities.

Unopposed campaign
Roger McDermott, senior fellow in Eurasian studies at the Jamestown Foundation, is a long-time watcher of the Russian military.

His assessment is that the uniforms and the uniformity of weapons suggest that "the well-organised 'militants' have all the hallmarks of Russian special forces, or to be more exact, the military intelligence special forces or 'Spetsnaz'".

Nonetheless he cautions that this is only a partial re-run of the initial Russian operation in the Crimea.

"In the Crimea," he notes, "Russian forces mounted an essentially unopposed campaign to seize key strategic points and exploit the weakness of the interim government in Kiev.

Pro-Russian gunmen in Sloviansk show no sign of complying with a deadline set by Kiev
Mr McDermott asserts that the situation is different in eastern Ukraine.

"The special forces units with local assistance can gain control of strategic buildings and key routes, but if the Ukrainian defence and security forces respond, there will be an escalation which will involve Russia's more conventional forces, including air power and ground forces units," he says.

Another veteran analyst of Russian military affairs, Keir Giles of the Conflict Studies Research Centre, says he is "depressed but unsurprised" by the escalating events over recent days.

When asked if he believes this could be a prelude to overt Russian military action, he replies that this is entirely plausible.

"This would play not only into Moscow's long-term narrative about securing the rights and lives of Russian citizens abroad, but also to the doctrinal imperative of ensuring security and stability on the approaches to Russia's borders," he says.

'Strategic shock'
Both analysts believe that the crisis has entered a new and perhaps critical phase. I asked Mr McDermott if Russia's aims in all of this were clear. Surely Moscow was taking a huge gamble?

"The risks are that the Ukrainian army and security forces put up more resistance than Moscow foresees, and it all descends into something long, drawn out and messy," he says.

However, "if the Kiev forces crumble, or fail to respond quickly enough, Moscow would have a grand bargaining chip to bring to the table and secure its objectives in the crisis: either the West recognises a dismembered Ukrainian state, or promotes the idea of a compromise involving a new constitution and the emergence of a weaker Ukrainian federal state more biddable to the Kremlin in the future."

In his view Moscow's key demands are clear: it wants the federalisation of Ukraine and a legal guarantee that the country will never enter Nato.

"The Kremlin is playing for high stakes and it believes it can win," he says.

In contrast Nato and the West seem to have few options to influence events on the ground. Mr McDermott says that the West has received what he calls "a strategic shock".

He argues that this crisis has revealed "weaknesses in the intelligence assessment of Russia and the potential threat it may pose in Eastern Europe.

"Both western analysts of the crisis and governments are at a loss to explain any means to prevent Russia achieving its strategic goals in Ukraine," he says.

"In place of sound thinking, we see only hand-wringing and embarrassment." 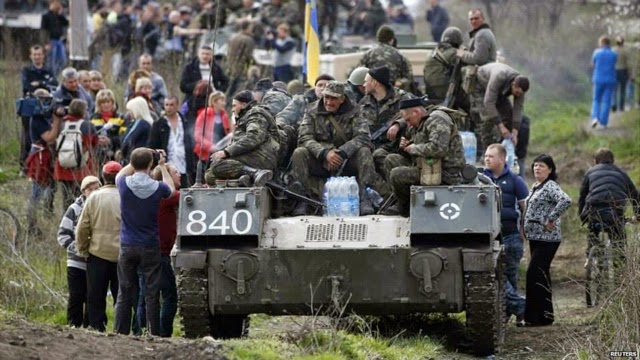 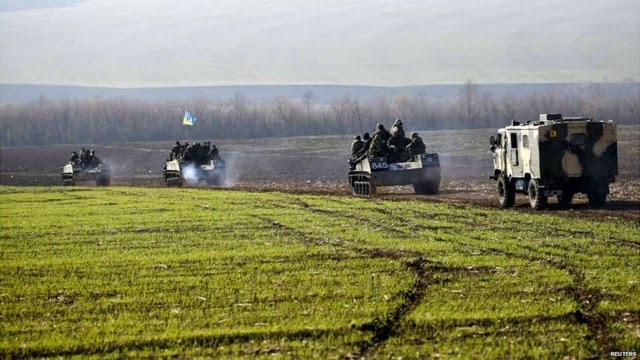 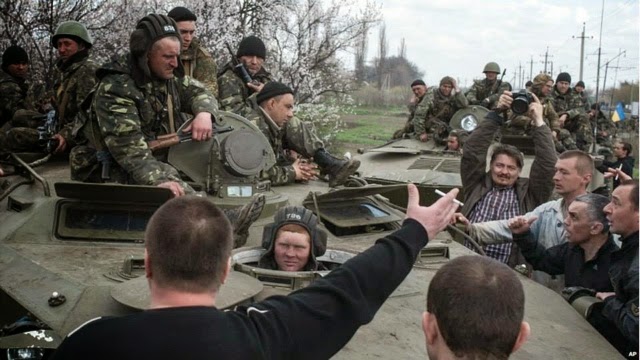 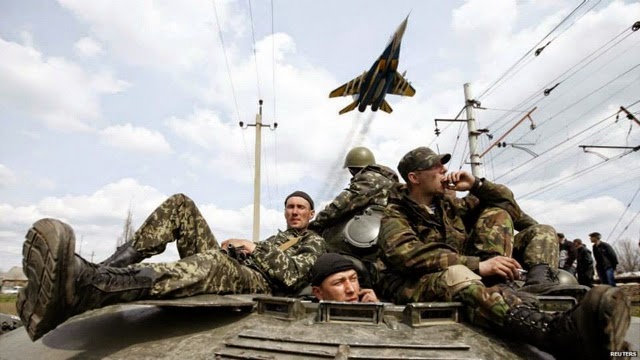 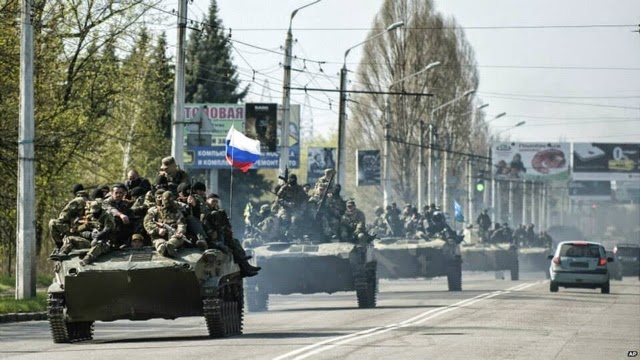 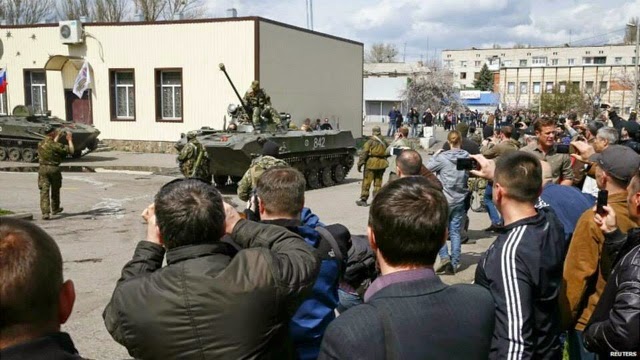 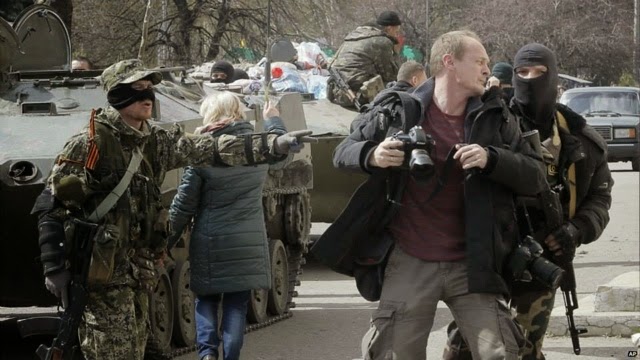 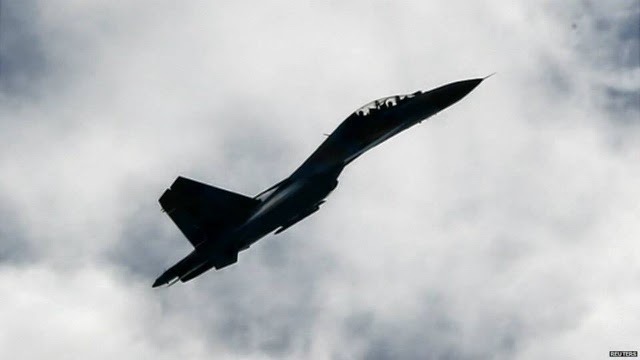 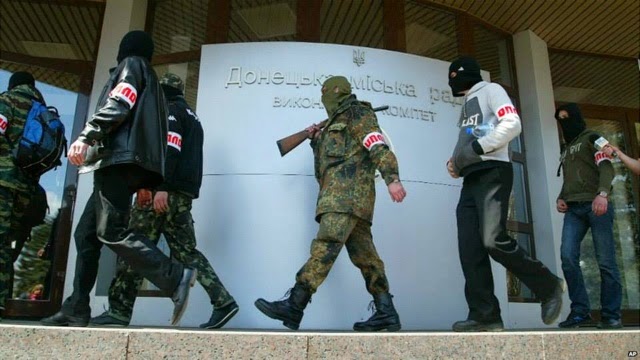 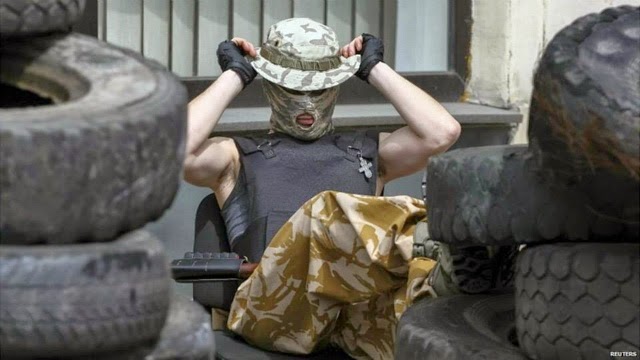