"Over the past two years, the U.S. government has collected almost a billion and a half dollars in fines in foreign bribery cases," says Mark Mendelsohn, the Department of Justice prosecutor in charge of more than 100 ongoing cases, one of which culminated in a record seven-year prison term for the former CEO of a subsidiary of the Halliburton Corp., and another which ended in a record $800 million fine against the German giant Siemens. "There's a whole world of conduct that rarely sees the light of day."

In Black Money, FRONTLINE correspondent Lowell Bergman investigates this shadowy side of international business, shedding light on multinational companies that have routinely made secret payments -- often referred to as "black money" -- to win billions in business.

"The thing about black money is you can claim it's being used for all kinds of things," the British reporter David Leigh tells Bergman. "You get pots of black money that nobody sees, nobody has to account for, ... you can do anything you like with. Mostly what happens with black money is people steal it because they can."

Leigh knows. In his groundbreaking reporting for The Guardian newspaper, he helped uncover one of the biggest and most complicated cases currently under investigation -- a story involving a British aerospace giant, the Saudi royal family, and an $80 billion international arms deal known as Al Yamamah, or "The Dove" in Arabic. "If there was one person who was the main man behind this arms deal, it turned out it was the U.S. ambassador, Prince Bandar bin Sultan," says Leigh.

It all started back in 1985, when the charismatic Prince Bandar was put in charge of acquiring new fighter jets for the Saudi Arabian air force. The Israeli lobby in Congress reportedly stood in the way of the United States making a deal with the Saudis, so President Ronald Reagan sent Bandar to the British. The prince approached a willing Prime Minister Margaret Thatcher, and they sealed the massive deal between the United Kingdom, BAE Systems (formerly British Aerospace) and the Royal Saudi Air Force.

Rumors swirled that billions in bribes had changed hands to secure the deal, but British officials denied wrongdoing. "Of course there is suspicion, and of course people are entitled to be suspicious," says Lord Timothy Bell, who was involved in the deal from the beginning on behalf of the Thatcher government. "But as far as I'm concerned, if the British government ... and the Saudi government reached a sovereign agreement over an arms contract that resulted in a tremendous number of jobs in Britain, a great deal of wealth creation in Britain, ... and enabled Saudi Arabians to defend themselves, ... I think that's a jolly good contract."

But then, as a growing, international anti-bribery movement -- led by the Organization for Economic Cooperation and Development -- spread, Britain signed onto a binding treaty. Soon after, a whistleblower came forward with documents and firsthand knowledge of alleged corrupt payments. Peter Gardiner, a high-end travel agent in London, laid bare the details of how he provided luxury services for Saudi Prince Turki and his family -- charter airplanes for massive shopping sprees, the purchase of expensive cars and extravagant honeymoon trips -- all paid for by BAE Systems. "It's the lifestyle that many people would like to have if they could afford it," says Gardiner. "It's a little bit beyond that of a film star, because you've got the diplomatic passport with it."

Gardiner took his allegations first to The Guardian's Leigh, and then to the British agency that investigates white-collar crime, the Serious Fraud Office, which began an investigation. That probe would turn up evidence of huge payments from the Al Yamamah funds to bank accounts controlled by Prince Bandar in Washington, D.C.

As the investigation grew, the Blair government was pressured by the Saudis and by Prince Bandar himself, who went to 10 Downing Street and threatened to end cooperation with the British in the fight against terror if the investigations into Al Yamamah continued. "The expression was, 'You know, there's going to be a lot of people dead on the streets,'" a senior British fraud prosecutor tells Bergman of the Saudi threats that ultimately led to the shutting down of the British BAE investigation. "If we go forward with an investigation into these accounts in Switzerland, we may find we're not going to be able to do what we can do to stop terrorism."

There was widespread frustration among corruption fighters about the British capitulation, and fears that the fledgling international anti-bribery movement would be undermined. Soon thereafter, the U.S. Department of Justice began its own investigation into BAE's worldwide network of suspicious payments. The case is now being watched closely by countries around the world interested in seeing whether the United States is willing, in a depressed economy, to press forward with an investigation and possible legal case against a company like BAE Systems, whose major client is the Pentagon, and which currently employs some 40,000 American workers. For its part, BAE says that it is cooperating with the investigations.

Black Money includes exclusive interviews with current and former prosecutors involved in the cases against BAE Systems, as well as with Prince Bandar's legal representative on this matter, former FBI Director Louis Freeh.

Parallel to the documentary, FRONTLINE and its international newsmagazine FRONTLINE/World have launched The Business of Bribes, an unfolding online investigation. The site offers breaking news stories, as well as in-depth interviews with middlemen, prosecutors, whistleblowers and former presidents, detailing the stories behind some of the largest bribery investigations in corporate history.

During the 1990s, Malaysian Deputy Prime Minister Anwar Ibrahim and a group of U.S. Senators organized a forum to exchange views among East Asians and Americans. Asked at one session about the role of Islam in politics, Anwar replied, "I have no use for governments which call themselves Islamic and then deny basic rights to half their population." 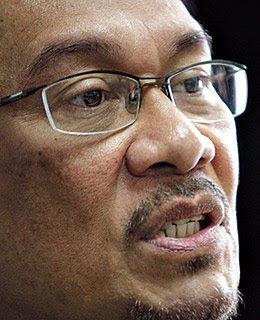 Anwar, 60, is back in the center of Malaysian politics. The coalition led by his wife Wan Azizah has become the main opposition bloc. His future role can be determined only by Malaysians. One can hope that they will embrace his brand of tolerance, valuing dialogue across political differences, and that this courageous leader will continue to play a leading role on the world stage.

Wolfowitz is a former U.S. Deputy Secretary of Defense